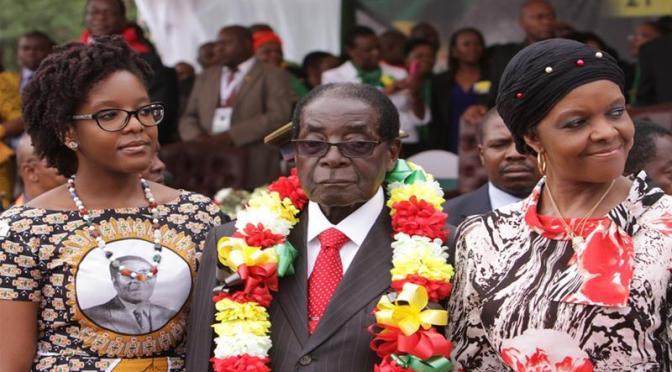 Love or despise him, Mugabe was one of the most consequential of Africa’s post-colonial leaders.

At his best, Robert Mugabe could rank beside such revolutionaries as Nelson Mandela and Che Guevara. In the 1970s, he was Africa’s teacher-turned Marxist rebel against white rule who declared: “Our votes must go together with our guns.”

He remains a Zimbabwean liberator who defied the West but Mugabe, who died on Friday aged 95, will also be remembered by some as an autocrat who butchered opponents, rigged votes and gobbled up cake at lavish birthday parties while his people went hungry.

“Mugabe was one of the most consequential of Africa’s post-colonial leaders. He remains highly regarded by many for his leadership role in the insurgency against white minority rule,” Brett Schaefer, Africa analyst at The Heritage Foundation, told Al Jazeera.

“But the violence and chaos resulting from his struggle to hold on to power led to thousands of deaths, millions of refugees and economic impoverishment. Mugabe’s legacy will forever be stained by his destructive and murderous acts.”

Mugabe was born under British colonial rule in Southern Rhodesia in 1924, the son of Bona and Gabriel, a carpenter. Despite poor school and job prospects for most black people, he gained a Jesuit education and thrived in academia.

Frustrated by racism and white-settler rule, Mugabe embraced socialism and grew more hardline. He spent 11 years in jail, waging a rebellion from behind bars via his resistance movement, the Zimbabwe African National Union (ZANU).

The fierce bush war brought white settlers to the negotiating table and led to a British-brokered accord in 1979.

By the end of the following year, Mugabe was elected prime minister of the newly-founded Republic of Zimbabwe.

But Mugabe also launched a crackdown on political rivals in the Matabeleland region that claimed the lives of some 20,000 Ndebele civilians.

After serving two terms as prime minister, he abolished the position and became president in 1987, a post he held for 30 years.

“He was a ruthless authoritarian, not burdened by democratic practice. But don’t mistake him for a much larger machine that operates in Zimbabwe – the ruthless ethos Mugabe represented is deeply-embedded in his political party, ZANU-PF,” academic Stephen Chan told Al Jazeera.

“They believe that those who fought in the Liberation War, from the beginning, against all odds, deserve to rule. Now they have entrenched modes of financial practice within Zimbabwe’s economy that they don’t want to give up.”

Zimbabwe had begun to recover from conflict, but a land reform policy that saw black farmers take over white-owned farms sparked domestic chaos and global outrage. Western nations slapped sanctions on the country and it was suspended from the Commonwealth.

For Mugabe, land grabs corrected colonial-era injustices and his defiance of Western “imperialism” resonated across the continent.

“The land is ours, we give it to who we please, it’s not the business of Britain to tell us who to give land and who not,” he told Al Jazeera in 2000.

This won Mugabe loyalty from war veterans, cronies and others who seized land; but it also led to an exodus of white farmers, hyperinflation and shortages of foodstuffs that slashed 40 percent off the economy, according to World Bank figures.

“Getting rid of white farmers was one of his biggest mistakes – it led to sanctions and economic collapse,” Tom Wheeler, a former South African ambassador, told Al Jazeera.

“It was catastrophic. The people couldn’t feed themselves any more, while Mugabe’s inner circle was high on the hog.”

In the maelstrom, Morgan Tsvangirai of the Movement for Democratic Change (MDC) emerged as a political rival. In 2010, Tsvangirai told Al Jazeera that the president had squandered his legacy and “betrayed the liberation that he fought for”.

Mugabe intimidated voters and rigged election outcomes, both the opposition and Western powers have said. Operation Restore Order saw the destruction of the homes or businesses of 700,000 mostly poor backers of the opposition in the capital, Harare, in 2005.

“The way he ran roughshod over the rule of law was an unmitigated disaster,” John Campbell, a former US ambassador to Nigeria, told al Jazeera.

“If ever there was a continent that desperately needs rule of law, it’s Africa. It’s crucial for development and political security. But, for his supporters, it was all about land: Mugabe’s expulsion of whites cancels everything else.”

While Tsvangirai won more votes in the 2008 election, Mugabe fought back with violence and the threat of greater bloodshed to broker a power-sharing “government of national unity”, in which he held on to the presidency.

“He had no sentimentality at all,” added Chan, author of Robert Mugabe: A Life of Power and Violence.

“He could feign normal, human feelings for public consumption; but if Mugabe needed to make a political corpse out of somebody and put a knife in their back, even if they had been a long-standing comrade, with him through thick and thin, he would do it.”

Once a charming pan-African visionary, Mugabe had dropped his socialist ideals and become a petty dictator, clinging to power and lavishing some $250,000 on his 85th birthday party in 2009, while Zimbabweans died of cholera.

In increasingly-erratic public appearances, he railed against Africa’s former imperial overlords. Britain was using “gay gangsters” to undermine him.

Only God – and not “the MDC, not the British” – could unseat him.

The father of four children from two marriages had become a pariah – the “Hitler of the time”, he said.

As economic hardship bit ordinary Zimbabweans, Mugabe was forced to step down by the military in November 2017 following nationwide mass protests.

After his resignation, he continued to live at home in Harare, visiting Singapore multiple times for medical treatment.

Despite his ignominious exit from the political scene, Mugabe’s legacy as a liberator was recognised by his successor, President Emmerson Mnangagwa, when he announced his death on Friday.

“Cde Mugabe was an icon of liberation, a pan-Africanist who dedicated his life to the emancipation and empowerment of his people. His contribution to the history of our nation and continent will never be forgotten. May his soul rest in eternal peace,” Mnangagwa said in a statement.