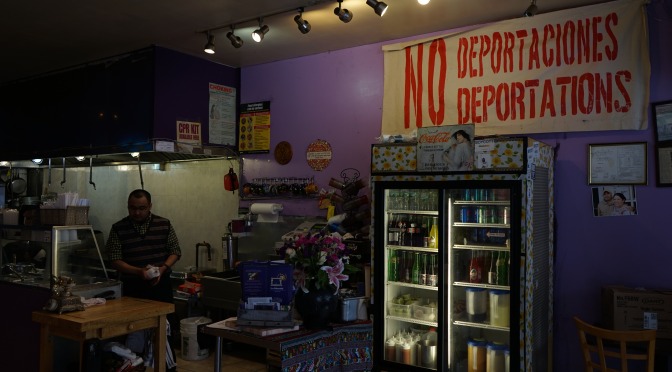 Cafes, churches and playing fields are quieter than usual, as undocumented immigrants lay low amid the crackdown

NEW YORK // With such slogans as “Resiste” and “No Deportaciones” emblazoned on the walls, there is little doubt that La Morada, a restaurant in a gritty district of New York, is more than your average taco-serving Mexican diner.

Sure, their Oaxaca-style tortilla, mole sauce and steaming hot chocolate delight locals. But the Saavedra family that owns and runs the eatery sees itself as a Bronx bastion against a revived immigration crackdown under United States President Donald Trump.

“There’s obviously a very palpable fear in our community and we want to be ready for the worst-case scenario,” Marco Saavedra, 27, a college graduate who serves dishes while fighting his asylum claim to remain in the US, told Al Jazeera.

“We’re still waiting to see how Trump does it, through courts or executive action. But we’ve got to be ready.”

Business has slowed since Trump’s inauguration in January as Latinos watch their pennies in uncertain times, said his sister, Yajaira Saavedra, 28. The bistro’s weekly civic meetings and “know your rights” workshops are, however, busier than before.

La Morada – which means both “purple” and “abode” – is not alone. Many taquerias, tamale bars and other Latino comfort food joints across the US have gone quiet. So have football pitches and churches where Sunday services ring out in Spanish.

The reason is simple. Many undocumented immigrants are less eager to risk driving a car and being stopped by police for a broken taillight, only for such routine violations to escalate into deportation proceedings.

“People are being cautious and more conservative due to the uncertainty of the Trump era,” said Yajaira, who benefits from former-President Barack Obama’s policy to defer action against some undocumented child migrants.

Fifty days into office, Trump, a Republican, is coming good on campaign pledges to deport undocumented immigrants in the US and build a wall along its 3,200km southern border.

Department of Homeland Security memos call for the hiring of 10,000 more Immigration and Customs (ICE) agents and 5,000 more Customs and Border Protection (CBP) agents, and tougher rules on whom will be targeted.

They would include recent entrants, failed asylum seekers, convicts and those charged with crimes. Trump has also moved to strip federal funding from the so-called sanctuary cities and states that limit cooperation with deportation teams.

In December, Pew Research Center found that, when asked, 58 percent of Americans highlighted the importance of deporting undocumented immigrants, while 62 percent stressed that some should be allowed to legalise their status in the US.

Among immigration experts, Trump has many critics. Steven Choi, director of New York Immigration Coalition, a civic group, blasted a “draconian enforcement agenda that wrongfully characterises immigrants as criminals and terrorises our communities”.

Others highlight the cost of Trump’s plans. The 15,000 new immigration officers must all be paid; a wall stretching from the Pacific Ocean to the Gulf of Mexico could cost $40bn, according to the MIT Technology Review.

The Center for American Progress found that ejecting all undocumented immigrants would hurt the US economy by $4.7 trillion over a decade. Deportations may even be pointless, says Pew, as more Mexicans leave the US than arrive nowadays.

In part, Trump is living up to pledges that won him last year’s election, particularly among white voters in parts of Pennsylvania, Michigan and other rust belt states who have watched factories shutter and an epidemic of opioid abuse ravage once-prosperous towns.

“The liberal elite calls for immigration policies, but they don’t see their impact on many of their fellow Americans,” Dave Ray, a spokesman for the Federation for American Immigration Reform (FAIR), a right-wing lobby group, told Al Jazeera.

“Their kids don’t go to the same schools and they don’t live in those neighbourhoods that have to handle an influx of illegal immigrants. The liberal elite is so removed from that reality, it’s like two different worlds.”

For Ray, Trump’s tough talk is already working. The number of illegal immigrants crossing from Mexico to the US fell by 40 percent between January and February, according to Homeland Security Secretary John Kelly.

Aside from securing the border, FAIR says US labour laws should be enforced. Once undocumented migrants are sacked by farm owners, eateries and other bosses in the US, they will head back to their motherlands to earn a crust.

Against this backdrop, many undocumented immigrants are readying for a knock on the door by deportation squads. Mexico’s 50 consulates in the US have been deluged with requests for birth certificates, passports and other forms of identification.

Some seek to regularise their status in the US, some undocumented parents want Mexican passports for US-born children in case they get caught in an ICE roundup and their whole family has to head south of the border with them.

Others are getting co-signers authorised on bank accounts and applying for co-guardianship of US-born children so that, if a family carer or breadwinner were deported, it would be easier for their partner to carry on, said Marco Saavedra.

The Cabrini Immigrant Services centre in downtown Manhattan has been overwhelmed. Legal aid slots on Mondays can accommodate 15 clients, but queues of 80 or more applicants mean scores are turned away, said manager Javier Ramirez-Baron.

“People feel attacked and afraid, so they want to see what they can do,” he said. “We’re helping them with their legal cases, their documents and preparing plans in case they’re stopped by police, so they’re ready for any scenario.”

Back in the South Bronx, the Saavedra family gets ready for the evening rush of orders of stuffed Poblano peppers and other deep-fried treats. Chefs, some of them undocumented, chop cactus salads and squeeze limes for fresh guacamole.

They typify the struggles of many Latinos in the US. The parents crossed the border without papers seeking work in the 1980s. Marco and Yajaira joined them years later, but only Yajaira benefited from the Deferred Action for Childhood Arrivals (DACA) scheme.

Their youngest daughter was born in the US and has citizenship.

Because of this, deportation proceedings against one family member would force difficult decisions upon the rest. This, of course, has been hanging over their heads for years, but the West Wing’s latest occupants give fresh cause for concern.

As far back as 1992, the Saavedras purchased a house outside Mexico City as a potential retirement home. An uncle takes care of the place, but, in recent months, they have bought more furniture to make it liveable.

“I don’t want to entertain it, but we think we’re resilient enough that if we must start another life in Mexico, we can,” said Marco, while musing about what jobs a US education could get him down south. “We always have to have a backup plan.”