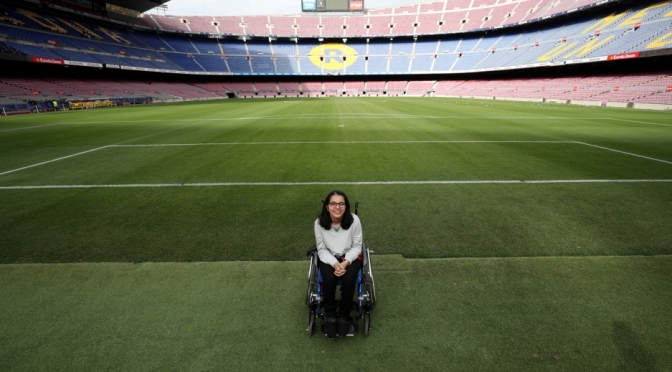 Disabled people struggle particularly hard when conflicts erupt. Getting the issue on the international agenda is about as tough as navigating through war-ravaged streets on crutches.

NEW YORK // When military helicopters were buzzing in the skies above her apartment in Aleppo, Syria, Nujeen Mustafa, who suffers from cerebral palsy and uses a wheelchair to get around, felt like a burden on her family.

Exiting the home involved carrying her down five flights of stairs. Better, they thought, to hide out in the bathroom and hope that barrel bombs dropped by President Bashar al-Assad’s forces would not come crashing through the ceiling.

“I knew that I was a dramatic disadvantage for them when it came to the need to escape,” Mustafa, now 20, said.

“It would have helped for me to know there was a way to get out without endangering my family and slowing them down.”

Mustafa’s story is one of survival against seemingly insurmountable odds. In January 2014, the family fled from Aleppo to southern Turkey. In August 2015, she said goodbye to her parents and began a month-long, 3,500-mile odyssey to Germany, with her sister pushing at the rear.

They crossed eight borders, including miles of wheelchair-pushing along gravelly tracks, nights spent in the wilderness and a risky sea crossing on a dinghy alongside dozens of other Syrians who were escaping the conflict.

Now a student in Wesseling, near Cologne, with an infectious smile and an unbridled sense of optimism, Mustafa is campaigning so that people with disabilities get more help when bullets start flying in the world’s hotspots.

Fleeing a war zone is hard for everyone. But try navigating streets of strewn rubble, blast craters and shattered glass in a wheelchair, on crutches or while blind or partially sighted.

Fleeing a war zone is hard for everyone. But try navigating streets of strewn rubble, blast craters and shattered glass in a wheelchair, on crutches or while blind or partially sighted, Mustafa said. A deaf evacuee might not hear dangers just around the corner.

From Rohingya villages in Myanmar to the battlefields of South Sudan and eastern Ukraine, people with disabilities have an extra set of problems to deal with when towns and cities come under attack.

Conflict is the cause of 16% of all disabilities. As wars drag on, the number of people with missing limbs or other permanent injuries adds up. In Syria, after eight years of carnage, almost one in four people have a disability.

In Cameroon this year, people with disabilities have been among the hardest hit by a separatist conflict in the English-speaking northwest and southwest regions that has forced half a million people from their homes.

Families have been forced to make heart-wrenching choices between leaving behind relatives with disabilities or exposing them to week-long journeys through bushland, said HRW’s central Africa researcher Ilaria Allegrozzi.

Those abandoned face abuse when government forces reach their towns. In Cameroon, one woman was mocked by government troops and told to remove her prosthetic leg and crawl around on the floor, forcing her to collect money from nearby rooms that they demanded as a payoff, said Allegrozzi.

Such cruelty is not uncommon, said Vladimir Cuk, executive director of the International Disability Alliance, a campaign group. People with disabilities are at greater risk of rape, abuse and starvation once family members have fled, he said.

Emina Cerimovic, one of HRW’s researchers on disability, saw harsh conditions peak in Greece during the global refugee crisis, when people with disabilities were among the masses from Syria, Afghanistan and elsewhere seeking new lives in Europe.

There, refugees with disabilities crawled on muddy floors to enter toilets that were not wheelchair-friendly, she said. In one camp, bathroom access was so bad that the parents of an 8-year-old Afghan boy with mental and physical disabilities had to put their son in diapers.

At a camp in Thessaloniki in Greece, Amin, a Syrian refugee who was deaf, languished in his tent alone for nine months. His hearing aid had gotten soaked while he crossed the Aegean Sea. Unable to converse, Amin was cut off from the world, Cerimovic said.

European Sea crossings are notoriously risky for refugees. For those in wheelchairs, the voyage likely involves leaving one’s chair at the shore, as human traffickers free up space to accommodate more paying passengers.

This happened to Ali, a 22-year-old Afghan refugee with disabilities, whom Cerimovic met in the squalid Moria camp in Lesbos. During his first two months there, without a wheelchair, Ali could not use the showers or toilets.

“How would you feel if someone took your feet away? My wheelchair is my feet.”

There is no quick and easy fix to this problem.

Aid workers are usually overstretched when refugees start fleeing war zones in large numbers. There is seldom enough of the basic necessities — water, food and medicine — to go around, let alone find time to track down hearing aids and crutches.

Still, securing more prosthetics, wheelchairs and other devices for refugee hubs could help ease the lives of people with disabilities. When camp staff hand out food parcels, a line that folks with disabilities can access makes life easier, Barriga said.

Campaigners are lobbying donors, humanitarians and the systems through which they operate, such as the European Union. The UN Security Council should make more legally binding references to disabilities, they say.

Upcoming UN resolutions on South Sudan, Afghanistan and the Central African Republic could add language around disabilities that nudge aid chiefs to think harder about the services they provide, monitor the results and report back afterward, Barriga said.

“It’s not just words on paper,” Barriga said. “It’s a binding commitment made by the UN Security Council which has a ripple effect on UN agencies and the way that humanitarians operate on the ground and at many other levels.”

So far, it has been a case of three steps forward, two steps back.

The annual UN resolution on CAR for 2015 obliged UN officials to “monitor, help investigate and report on violations and abuses” against people with disabilities. But that reference was scrapped in subsequent documents.

In April, Mustafa made a landmark speech to the UN’s top body in New York. She told diplomats that people with disabilities were “invisible” and said more of them should be hired to help run camps and aid programs.

She called for a “world that protects, respects and values” people with disabilities.

To that end, campaigners also want to change how people talk about the issue.

Rather than describe individuals as “disabled,” “handicapped” or “wheelchair-bound,” referring to them as a “person with disabilities” stresses their dignity and humanity, said Barriga.

It goes doubly for Mustafa. While her campaign highlights the plight of people with disabilities in wartime, Mustafa recalls how life with cerebral palsy in Syria was a slog even before fighting broke out in 2011.

Leaving her apartment involved being carried downstairs before the war, too — something only attempted for the annual Persian New Year party. The other 364 days were “like house arrest,” she said.

In Syria, her prospects were dim, even in peacetime. In Germany, where schools and movie theaters often have wheelchair ramps, Mustafa eyes a world of possibility and plans to study psychology at university.

“It’s not just being able to get elevators up and down buildings,” Mustafa said. “The mentality is different here. There’s no underestimation. No pity. No undervaluing a person just because he’s disabled. They push you to reach your full potential.”

This article originally appeared on PRI’s The World.